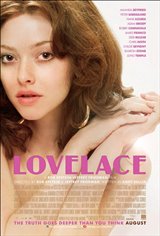 The story of Linda Lovelace (Amanda Seyfried), who married young and was forced into performing in pornography films by her abusive husband, Chuck Traynor (Peter Sarsgaard). She became famous for her appearance in the pornographic film Deep Throat, which to her horror, became popular with mainstream audiences. She finally found the courage to leave him.

Based on the autobiography Ordeal by Linda Lovelace.