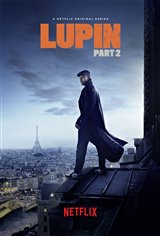 Assane Diop and his father Babakar move from Senegal to Paris, where Babakar has a job working for a wealthy family as their chauffeur and butler. When Babakar is accused of stealing a priceless necklace that was once owned by Marie Antoinette from the family safe, he's thrown in prison, where soon after, he dies, leaving Assane, 14, an orphan.

Years later, Assane (Omar Sy), inspired by the stories of fictional thief Arsène Lupin in the novels by French author Maurice Leblanc, has turned into a thief. Marie Antoinette's necklace has been found returned to the family, who is now selling it at an auction hosted by the Louvre. Assane comes up with an elaborate scheme to steal it by posing as a janitor at the museum with the intent of somehow clearing his father's name. He enlists three loan sharks, to whom he owes money, to help him.

Inspired by the classic French stories about Arsène Lupin, the gentleman thief and master of disguise.