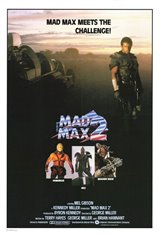 Law and order has gone out the window following a global war and Max Rockatansky (Mel Gibson) roams the desolate land, trying to avoid gangs of marauders, as he scavenges for something to eat and drink.

Max, who also needs fuel for his vehicle, runs into a gang trying to invade a refinery protected by defenders. The leader tries to convince them to surrender the facility. A group of defenders try to escape, but are caught and killed by the gang.

All except one, who's badly injured. Max rescues him and promises to return him to the facility in exchange for a tank of fuel. They get inside but when the injured man dies, Max finds he has to make a different deal, one that puts him into even more danger.