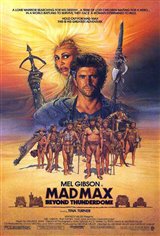 About 15 years after the events of Mad Max 2, nuclear war has finally destroyed what little was left of civilization.

Grizzled and older, former cop Max (Mel Gibson) roams the Australian desert in a camel-drawn vehicle -- until father-and-son thieves Jebediah Sr. (Bruce Spence) and Jr. (Adam Cockburn) use their jury-rigged airplane to steal his possessions and means of transportation.

Max soon winds up in Bartertown, a cesspool of post-apocalyptic capitalism powered by methane-rich pig manure and overseen by two competing overlords, Aunty Entity (Tina Turner) and Master (Angelo Rossitto), a crafty midget who rides around on the back of his hulking underling, Blaster (Paul Larsson).

Seeking to re-equip himself, Max strikes a deal with the haughty Aunty to kill Blaster in ritualized combat inside Thunderdome, a giant jungle gym where Bartertown's conflicts are played out in a postmodern update of blood and circuses.

Although Max manages to fell the mighty Blaster, he refuses to kill him after realizing the brute is actually a retarded boy. Aunty's henchmen murder Blaster nonetheless, then punish Max for violating the law that Two men enter, one man leaves.

Lashed to the back of a hapless pack animal and sent out into a sandstorm, a near-death Max is rescued by a band of tribal children and teens. The descendants of the victims of an airplane crash, the kids inhabit a lush valley and wait for the day when Captain Walker, the plane's pilot, will return to lead them back to civilization.

Some of the children, refusing to believe that Max isn't Walker and that the glorious cities of their mythology no longer exist, set off in search of civilization on their own.

Max and three tribe members must then rescue their friends from Bordertown and the clutches of Aunty Entity -- a quest that ends in a lengthy desert chase sequence that echoes the first two Mad Max films. Spence also appeared in Mad Max 2 in a different role, that of the Gyro Captain.