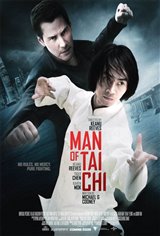 Linhu (Tiger Chen) lives in a Beijing tenement block. When he's not working, he studies English and practices a form of tai chi called Ling Kong, which means "Empty your spirit."

Linhu is approached by a mysterious businessman, Donaka Mark (Keanu Reeves), with an offer to compete in an underground fight club.

Linhu turns Donaka down at first, but when he realizes that the money he could earn would enable him to rescue his tai chi master's dilapidated temple from being demolished, he accepts.

However, his success as a fighter—fuelled by his deeply traditional, disciplined mode of martial art—brings out a savage side in Linhu. Linhu has to struggle between his pacifist principles and his violent impulses.