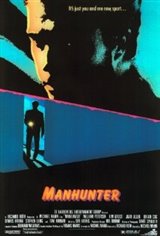 Red Dragon, the Thomas Harris novel that introduced serial killer Hannibal Lecter to the world, was adapted for the screen by Michael Mann as Manhunter. Ace criminal profiler Will Graham (William Petersen) is very good at his job because he has the ability to make himself think like the killers he tracks.

Will has been in retirement since catching Hannibal the Cannibal Lecter (Brian Cox), as being inside that particular deranged mind caused Will to have a breakdown.

Will's boss Jack Crawford (Dennis Farina visits Will at his home, showing him pictures from a murder scene and asking for his help in catching a new killer they have dubbed the Tooth Fairy (Tom Noonan). In order to test his mental strength, Will visits Hannibal in his prison cell.

Adding to the already substantial mental stress Will experiences when he returns to the job are nosy tabloid reporter Freddy Lounds (Stephen Lang), as well as Hannibal's attempts at seeking revenge through the Tooth Fairy.

After two additional films that featured Anthony Hopkins as Hannibal Lecter (Silence of the Lambs and Hannibal) became box-office blockbusters, Manhunter was re-made as Red Dragon starring Hopkins and Edward Norton as Will Graham.