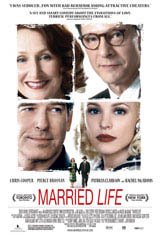 A strong blend of suspense, star-crossed romance, and wry comedy of manners, Married Life is an unconventional human drama about the irresistible power of utter madness of love.

Harry (Chris Cooper) decides he must kill his wife Pat (Patricia Clarkson) because he loves her too much to let her suffer when he leaves. Harry and his much-younger girlfriend Kay (Rachel McAdams) are head over heels in love, but his best friend Richard (Pierce Brosnan) wants to win Kay for himself. As Harry implements his awkward plans for murdering his wife, the other characters are occupied with their own deceptions. Like Harry, they are overwhelmed by their passion, but struggle to avoid hurting others.

Married Life is an uncommonly adult film that surprises and confounds expectations. While it plays with mystery and intrigue, its ultimate concern is: "What is married life?" In its sly way, Married Life poses perceptive questions about the seasonal discontents and unforseen joys of long-term relationships.