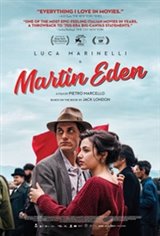 Naples, 20th century. Sailor Martin Eden rushes to help Arturo Orsini, who is being beaten up by a dock guard. To thank him, the frail young man invites Martin to meet his bourgeois family. Martin quickly falls for his sister Elena. Her feelings for the handsome sailor are mutual, but she immediately notices his lack of education. Martin confides in her his dream of becoming a rich and famous writer, which would make him more acceptable to Elena’s parents. Having been kicked out of his sister and brother-in-law's apartment, Martin stays with a widowed mother in exchange for odd jobs around her home. The aspiring writer meets Russ Brissenden, a rich poet disillusioned by fame, who helps him sharpen his style but also encourages him to adopt increasingly clear-cut political positions. But with that comes the risk of alienating Elena.