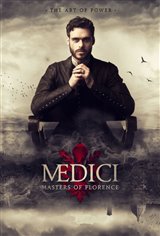 Set in 15th century Florence, this political drama series follows Cosimo "The Elder" de' Medici (Richard Madden) as he is elected head of the Florentine Republic. Due to his father Giovanni's (Dustin Hoffman) mysterious death, he has also inherited the family business — Banco Medici or the Medici Bank.

Weaving between the present in 1434 and 20 years prior, Medici: Masters of Florence explores Cosimo's struggle to grasp his sudden influx of power, while also taking a look back at the ruler's early childhood with his father and brother Lorenzo "The Elder" (Stuart Martin).