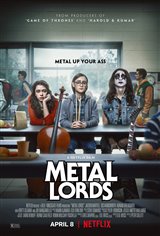 Kevin (Jaeden Martel) has been best friends with Hunter (Adrian Greensmith) for a long time. Since Hunter loves heavy metal and wants to start a band, Kevin goes along with him, since he knows how to plays drums, or at least one drum, from being in the marching band. One day during band practice, Kevin meets Emily (Isis Hainsworth), a new girl who plays the cello, but joined the marching band to get out of gym class, just like he did.

He thinks she'd be perfect for the band Hunter is starting, even though they're looking for a bass player and not a cello player. However, Hunter disagrees, especially when Kevin and Emily's relationship grows into something more than classmates. All Hunter cares about is winning the upcoming Battle of the Bands. And he wishes Kevin would be as focused as he is on forming the best post-death heavy metal band there ever was.