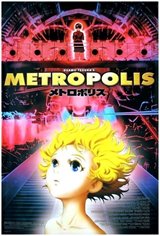 In a future society, a giant city-state is built into three levels and a variety of robots do day-to-day chores in their designated areas. On the surface a perfectly content society has been achieved, but there are many in the lower city that have developed a hatred toward the robots who have taken many of the lower ranked jobs away from human beings.

The rich and powerful Duke Red, has plans for the city, and secretly has a state-of-the-art robot made to replace his late daughter Tima. Red has placed enough power into Tima to control the world, which is exactly what he intends her to do. But when his adopted, robot-hating son, Rock, discovers the plan, he goes on an all out rampage to destroy Tima.

Meanwhile, arriving in the city are Private Detective Shunsku and his nephew, Kenichi, who are searching for a criminal they believe is in hiding within the city limits. Their search will lead Kenichi to a bewildered Tima, and without realizing her true nature, Kenichi will work to protect her from Rock.