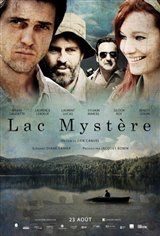 To get revenge on his brother who slept with his wife, Eric quickly leaves Montreal, having extracted all the money from the company they both own. Taking refuge in a cottage on a lake on the border of Quebec and the United States, unusual events soon disturb his solitude. Philippe Morel, a neighbor, tells him about the legend that surrounds the place, called the Lake of Lost Souls. When he ventures into the nearby village, Eric becomes infatuated with an exotic dancer, who moves in with him, hoping to escape a violent policeman who’s in love with her. However, their relationship doesn’t last and she leaves. Shortly after, a notorious criminal who just escaped from prison arrives and threatens Eric and Philippe.