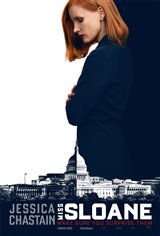 Elizabeth Sloane (Jessica Chastain) is a ruthless and successful political lobbyist notorious for her unparalleled talent and her desire to win at all costs. As she exposes D.C. lobbyists on both sides of the gun control debate, a new legislation requiring more stringent background checks for gun ownership is created, and she is pitted against the formidable power of her political opponents.

Using her skills, she jeopardizes those closest to her, and puts her own career at risk in order to win. The thriller pulls back the curtain on how Capitol Hill games are played and won as Sloane faces off against the most influential powers in Washington.