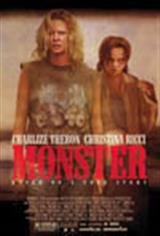 A dark tale based on the true story of Aileen Wuornos, one of America's first female serial killers. Wuornos had a difficult and cruel childhood plagued by abuse and drug use in Michigan. She became a prostitute by the age of thirteen, the same year she became pregnant.

She eventually moved to Florida where she began earning a living as a highway prostitute--servicing the desires of semi-truck drivers. The tale focuses on the nine month period between 1989 and 1990, during which Wuornos had a lesbian relationship with a woman named Selby.

And during that very same time, she also began murdering any of her clientele who attempted to rape her. This turned the tables on a rather common phenomena of female highway prostitutes being the victims of serial killers--instead Wuornos, herself, carried out the deeds of a cold-blooded killer.