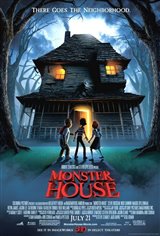 Twelve-year-old DJ Walters has too much time on his hands. He gets it into his head that there's something weird about old man Nebbercracker's house across the street. Things keep disappearing into the dilapidated structure: basketballs, tricycles, toys and pets. Come to think of it, whatever happened to Mrs. Nebbercracker?

It's the day before Halloween and DJ and his candy-friendly pal Chowder have a run-in with Mr. Nebbercracker after their basketball wanders onto his lawn and is mysteriously swept into the house. When the house tries to swallow their new friend Jenny and no one believes the frightened trio's claims that the house is up to no good, it's up to them to investigate.

They turn for advice to Skull, a 20-something slacker/arcade machine master who once played a video game for four days straight on one single quarter, a gallon of chocolate milk and an adult diaper. Together they come up with what seems to be a foolproof plan to once again make the neighborhood safe for trick or treaters.