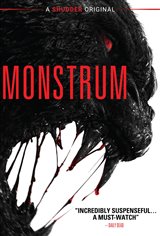 Set in 1527 during King Jungjong's reign, rumors start spreading about a man-eating monster killing people in Mount Inwangsan. The King is forced to take action to find out if the "Monstrum" rumors are true.

Disgraced general Yun Kyum (Kim Myung-min) is called upon to find out the truth. Yun Kyum is joined by his right-hand man Sung Han (Kim In-kwon) and his adopted daughter Myung (Lee Hye-ri) as they embark on a mission to find the monster.