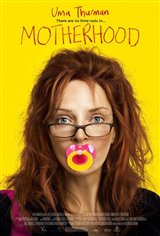 Eliza Welch (Uma Thurman) is a former fiction writer-turned-mom-blogger with her own site, "The Bjorn Identity." Putting her deeper creative ambitions on hold to raise her two children, Eliza lives and works in two rent-stabilized apartments in a walk-up tenement building smack in the middle of an otherwise upscale Greenwich Village. Eliza's good-natured but absent-minded husband (Anthony Edwards) seems tuned out to his wife's conflicts, not to mention basic domestic reality, while her best friend Sheila (Minnie Driver) understands this—and Eliza—all too well.

MOTHERHOOD takes place in a single day that pushes to the tipping point Eliza's fundamental fear she's lost herself. Starting at dawn, her to-do list is daunting: prepare for and throw her daughter's 6th birthday party, mind her toddler son, battle for a parking space during an epic alternate side parking showdown, navigate playground politics with overbearing moms, and mend a rift with after posting her best friend's confession on her blog. On top of it all, Eliza decides to enter a contest run by an upscale parenting magazine. All she has to do is write 500 words answering the deceptively simple question, "What Does Motherhood Mean to Me?"

In the process of trying by nightfall to put these thoughts into words that don't "sound like bad ad copy," Eliza rediscovers her own voice and realizes what is truly valuable in her life. At once hilarious and poignant, MOTHERHOOD looks at the challenges facing mothers everywhere with a keen eye to every slight to a nearly-middle-aged woman's selfhood—from being called "M'am" by condescending twentysomethings to endlessly stooping to pick up toys and a spouse's dropped socks.