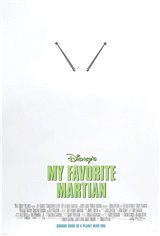 In this intergalactic comedy, based on the classic television series My Favorite Martian, ambitious television reporter Tim O'Hara stumbles upon a Martian whose spaceship has accidentally crash landed on earth. Thinking this is the story of the century (and his ticket to a Pulitzer Prize), Tim plans to expose the Martian, who, posing as Tim's Uncle Martin, takes human form and has plans of his own.

In fact, all of Tim's efforts to divulge the truth are systematically thwarted by the resourceful alien who ultimately recruits Tim to help him repair his ship for a return to Mars. They eventually become pals and join together to overcome the many hilarious obstacles that confront them along the way.