My Son, My Son, What Have Ye Done 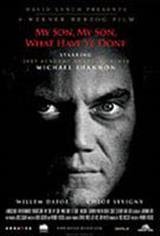 Officers arrive at a typical middle-class neighborhood in San Diego, where a suspect has barricaded himself inside a home and appears to have taken hostages.

Two friends he had urgently telephoned earlier that morning arrive, but too late. As they and their neighbors try to come to grips with what has happened, they tell their stories to the detective in charge of the crime scene.

In a series of flashbacks, the bizarre story of Brad Macallam begins to emerge. After an ill-fated white-water kayaking trip in a distant land, Brad finds readjustment to suburban life increasingly difficult. As his disaffection grows and his relations with those around him become strained, he glimpses a world more vivid and strangely frightening than others can see. The detectives try to penetrate the mystery of his story, but the questions only multiply.