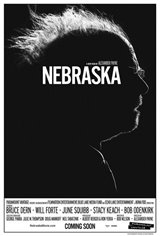 Woody (Bruce Dern), an aging alcoholic, wants to go to Lincoln, Nebraska after getting a sweepstakes letter in the mail that says he's won a Mega Sweepstakes $1 million prize. Despite suffering from confusion at his advanced age, he continues to walk in the direction of Lincoln, determined to get his money.

When his son David (Will Forte) sees the letter, he realizes it's a scam to get people to buy magazine subscriptions, but his father is so insistent about going to claim his money that David finally decides takes him on a road trip from Montana to Nebraska, much to his mother's (June Squibb) dismay.

Along the way, they make a stop in Woody's home town where they meet up with his crooked ex-business partner, his wacky and greedy relatives and other assorted small town folks who show David a side of his father that he never knew.