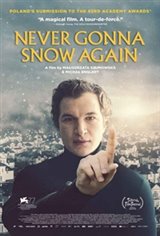 Never Gonna Snow Again follows Zhenia, a Russian-speaking immigrant from the East enters the lives of the rich residents of a bland, walled off community as a masseur. Despite their wealth, the residents emit an inner sadness, a longing. The mysterious newcomer's hands heal, his eyes seem to penetrate their souls.

To them, his Russian accent sounds like a song from the past, a memory of their seemingly safer childhood. Zhenia is able to change their lives.