Never Have I Ever (Netflix) 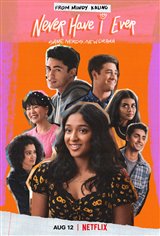 After a terrible freshman year at high school, sophomore Devi Vishwakumar (Maitreyi Ramakrishnan), a modern first-generation Indian American teenage girl, decides that she and her equally unpopular friends are going to be popular. She's planned how to achieve this goal by starting with choosing a boyfriend for each of them—no matter how unsuitable they are.

Although she sets her sights at first on Jonah Sharpe (Dino Petrera), who's obviously gay but not out yet, when Paxton Hall-Yoshida (Darren Barnet) walks into her class with his good looks, hot bod and chiseled jaw, she can't help but dream of becoming somehow linked to him in her effort to achieve popularity, even though she considers him leagues above her.

In the meantime, she has a rivalry going with Ben Gross (Jaren Lewinson), a rich kid who's the smartest boy in her class. As the smartest girl in class, she wants to beat him in every subject and prove—not just to him—that she and her friends can be popular.