Night Stalker: The Hunt for a Serial Killer (Netflix) 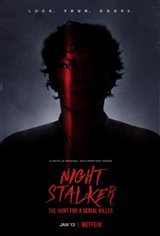 This limited docu-series takes viewers back to the sweltering summer of 1985, when a record-breaking heatwave hit Los Angeles, along with a series of murders and sexual assaults that at first seemed disconnected. The victims were men, women, and children. They ranged in age from six to 82. They came from different neighborhoods, racial backgrounds and socioeconomic levels. Never before in criminal history had a single killer been responsible for such a grisly array of crimes.

Racing against the clock to stop this nocturnal monster who climbed through windows to commit murders were a young detective named Gil Carrillo from the Los Angeles County Sheriff’s Department and the legendary homicide investigator Frank Salerno. As they worked tirelessly to solve the case, the media hounded their tracks, and panic gripped California.