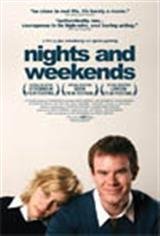 Tonight the Cleveland Institute of Art Cinematheque takes its show on the road—to the restored Capitol Theatre in the Gordon Square Arts District at the corner off W. 65th Street and Detroit Avenue on Cleveland's West Side. This newly reopened historic theatre has been converted into a triplex with all-digital projection. The Cinematheque's second show at the Capitol on November 19th (THE GENERAL plays earlier) will take place in one of the theatre's smaller houses upstairs (not wheelchair accessible). Nights and Weekends is a recent Amerindie movie that stars its co-writers and co-directors, Joe Swanberg and Greta Gerwig, both fixtures in the ultra-low-budget "mumblecore" movement—as are the movie's supporting players Jay Duplass (co-director of Puffy Chair and Baghead) and Lynn Shelton (director of Humpday). With an 88% "fresh" rating on RottenTomatoes.com, the film is an unvarnished, naturalistic account of a bumpy long-distance relationship between two twenty-something young people who live separately in Chicago and New York. "Swanberg and Gerwig have a gift for constructing the kind of moments rarely seen in contemporary American independent film." –The Onion A.V. Club. No one under 18 admitted! Cleveland premiere. DVD.