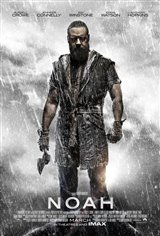 Human barbarism and warfare have ravaged the landscape. Noah (Russell Crowe), a peaceful man, just wants to live a righteous life with his family. Every night, Noah has visions of death by water, followed by renewed life on Earth.

He's sent word from the Creator that a great flood is coming that will destroy the world and all life. When Noah begins to build a giant ark in order to save himself, his loved ones and two of every species from the impending flood, he's approached by an army of men who want to take over the boat in an effort to save themselves.