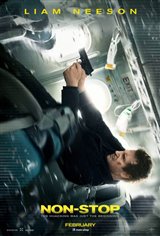 During a transatlantic flight from New York City to London, U.S. Air Marshal Bill Marks (Liam Neeson) receives a series of cryptic text messages threatening to kill a passenger on the plane every 20 minutes unless Bill instructs the airline to transfer $150 million into an off-shore account. Until he secures the money, a passenger on his flight will be killed every 20 minutes.

Although Bill explains the situation to the pilot, he doesn’t believe the threat until one of the passengers is mysteriously killed. When the account number given to Bill to transfer the money to is in his name, Bill believes he’s being set up, and when he finds a bomb on the plane, he becomes the main suspect.