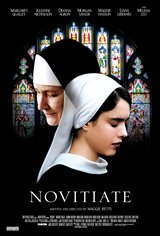 In the mid-1950s, young Cathleen Harris is taken to a Catholic Church by her non-religious mother (Julianne Nicholson) so she can get an idea of what religion is about. Soothed by the peace she finds in Church, in contrast to her home where she has to endure her parents' loud and frequent arguments, Cathleen is drawn in.

Five years later, Cathleen (Sasha Mason), now 12, is offered a full scholarship to a parochial Catholic school, where she's taught by nuns. Shy Cathleen finds her place there and by the time she's 17, she wants to become a nun and enters a convent.

However, while studying to be a nun under the direction of the extremely strict Reverend Mother (Melissa Leo), there's an upheaval within the Church as new directions come from Rome. At the same time, Cathleen (Margaret Qualley) begins to find her dedication and beliefs wavering.