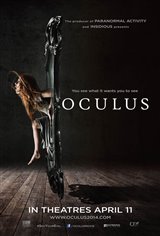 Ten years earlier, tragedy struck the family of teenage siblings Tim and Kaylie Russell. Their parents were brutally murdered and Tim was charged with their deaths and convicted.

Tim (Brenton Thwaites), now in his 20s, is released from a mental institution and just wants to move on with his life; but his sister Kaylie (Karen Gillan) wants to clear Tim's name. She's convinced the Lasser Glass, an antique mirror in their childhood home, unleashed a malevolent supernatural force that killed their parents.

Kaylie tracks down the mirror and finds out similar deaths occurred to other owners over the course of the past 100 years. With the mysterious mirror back in their possession, Tim and Kaylie find themselves experiencing terrifying hallucinations, and realize, too late, that what happened to them 10 years earlier is starting to happen again.