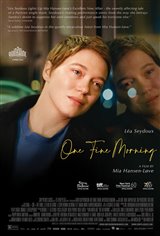 Sandra (Léa Seydoux), a young single mother raising an eight-year-old daughter, works as an interpreter. She struggles to take care of her father Georg (Pascal Greggory), who's been diagnosed with the neurodegenerative disease Benson’s syndrome, which causes a loss of vision and mental faculties. He's become increasingly confused and she and her mother, Georg's ex-wife, try to find him a decent nursing home.

While walking in the park Sandra runs into her married friend Clément (Melvil Poupaud), who has a young son. She and Clément begin an affair, even though he has no plans to leave his wife.