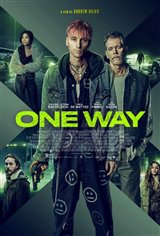 Freddy, a petty criminal, is on the run with a bag full of cash and coke. He's in way over his head and with a bullet in his gut he's running out of time fast. If he doesn't get a blood transfusion in the next couple of hours he's dead. He's dead even quicker if Vic , the female Mexican drug baron he's stolen from catches him first. When he hops on a Greyhound bus to evade her, he is befriended by a young girl who not only reminds him of himself but also his own young daughter. As he tries every trick in the book while using every meaningful relationship he has to get out of his situation, he faces his personal demons and redemptively searches his soul to try and make the best decision not for himself this time - but rather for the others that he cares about the most.