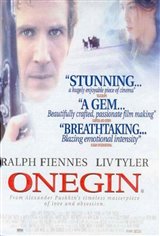 Eugene Onegin (Fiennes) is a cynical aristocrat who is one of St. Petersberg's most eligible bachelors. He inherits his uncle's estate and while in the countryside preparing for its sale, he meets the shy and beautiful Tatyana (Tyler). Tatyana pens a letter professing her love to him, but he callously rejects her. After being forced to fight a duel over a misunderstanding, he leaves. Years later, he runs into Tatyana at a friend's party. Seeing her in a different light, he falls passionately for her. Now a sophisticated and married woman, Tatyana's marital vows and code of honor are tested.

Based upon the Russian verse novel Yevgeny Onegin by Alexander Pushkin.