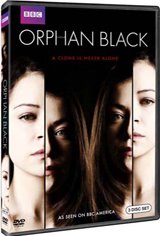 When Sarah Manning (Tatiana Maslany) witnesses a woman who looks like she could be her twin commit suicide by jumping in front of a train, she picks up her bag and discovers the woman is a police officer named Beth, who has a lot of money.

Sarah decides to pose as Beth long enough to empty her bank account in an effort to solve her problems and get back custody of her young daughter, but gets in over her head, especially when she meets Beth's boyfriend and discovers there are more women who are genetically identical to her and Beth.