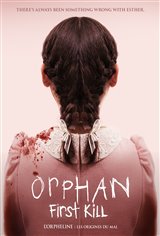 In this prequel to the 2009 film Orphan, Leena Klammer (Isabelle Fuhrman) is a woman suffering from hypopituitarism, and resembles a child. She decides to present herself as "Esther," the missing daughter of Katie Mauerova (Julia Stiles) and Richard Mauerova (Rossif Sutherland). Richard becomes convinced that she isn't his daughter, while Katie disagrees, believing that her husband is suffering from paranoia and hallucinating.

Leena tries to separate them, causing major problems to the family. But the couple soon discover Leena's dark past and murderous history.