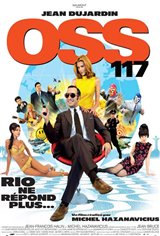 It's 1967 and Hubert Bonnisseur of Bath, alias OSS 117, is sent on a mission to Rio to get two microfilms containing the names of Frenchmen who assisted the Nazi regime. First he has to track down the old Nazi war criminal who has them and give him a large sum of money. The French secret service agent—a chauvinistic ignoramus—albeit a lucky devil, barely understands the high stakes of his mission. His spirits lift when he teams up with Dolores, a sexy Mossad agent who's tracking the same Nazi.