Pandemic: How to Prevent an Outbreak (Netflix) 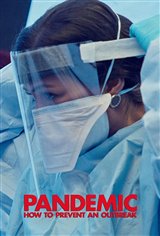 In this six-episode docuseries, which was filmed before the outbreak of the coronavirus, we meet the heroes on the front lines of the battle against influenza — the doctors in the U.S. and Asia, and the researchers who race to develop a universal vaccine.

We also meet a variety of people, including a young mother of five who homeschools her children and believes they have the right to choose not to be vaccinated, even if it means not being able to join sports teams or other organizations, despite having a child who's a talented basketball player.

Next we see the grave of an eight-year-old Guatemalan boy, Felipe Gomez Alonzo, who died of the flu after he and his father entered the U.S. and were held in detention. A retired nurse, Susan Flis, volunteers in Arizona, vaccinating migrants arriving at the border so no more children die needlessly.

Dr. Syra Madad, Senior Director of Special Pathogens Program for NYC Health & Hospitals, deals with preparedness and response to high consequence infectious diseases such as Ebola, SARS, MERS and influenza. She talks about how these illnesses cause widespread fear and panic.

Dr. Madad says it can begin with only one infected person arriving on a flight in New York to start an outbreak that can lead to a pandemic, infecting thousands even just by breathing near another person when there is no immunity to this new disease. She predicts that in one month, NYC would be incapacitated by the need for medical help, morgues would be overflowing and in another month, it would spread through the world. She says, "And all it would take is just one person."

Throughout the series, we learn about researchers' efforts in trying to stop the next global outbreak, while we feel the irony that the COVID-19 pandemic began just after this documentary was completed.