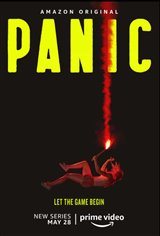 In the small Texas town of Carp, every year the graduating high school seniors hold a competition called Panic. All year long, they're forced to pay into a fund and the winner of the game gets the loot.

However, each level of the game is increasingly dangerous and last year, two teens died while playing it. Heather Nill (Olivia Welch) doesn't plan to enter, until she finds out her mother took the stash of money she had tucked away to pay for college. Heather's best friend, Natalie (Jessica Sula), who wants to leave Carp to become an actress in Hollywood, makes a deal with her. If either of them wins, they'll split the pot.

However, Dodge Mason (Mike Faist), a new kid who arrived in town at the start of senior year, is also entering, but as they slowly discover, he may have a different reason for playing Panic that has nothing to do with the money.

This 10-episode series is based on the YA novel of the same name by Lauren Oliver.