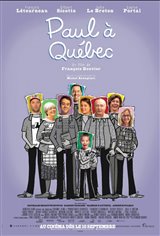 In 1999, Paul, an aspiring artist, accompanies his wife Lucia and their daughter Alice to St-Nicolas, a neighborhood near Quebec City, to celebrate Saint-Jean Day at Lucie's parents’ home. During the happy reunion, at which Lucie’s two sisters, their husbands and children are also in attendance, Paul notes the declining health of Roland, the bleeding-heart but gruff patriarch. Indeed, a few weeks later, the Beaulieu sisters learn that their father, already suffering from prostate cancer, has also been diagnosed with pancreatic cancer.

Months pass. Against Roland’s will, his wife Lisette places him in a hospice in Quebec City. Having left their Plateau Mont-Royal apartment for a house in Ahuntsic, Paul, Lucie and Alice regularly travel to be at Roland’s bedside. The sad, slow decline of his father-in-law inspires the artist to make Roland the subject of his first comic strip.