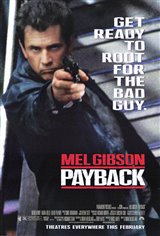 Left for dead by his double-crossing partner, it's payback time as a guy named Porter (Gibson) is mighty peeved that Val (Henry) not only took his money, he also took his wife and almost took his life. Not exactly a heroic kind of guy, Porter doesn't really care who has to die as he sets out to recover the loot that belongs to him.