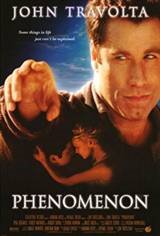 Director Jon Turteltaub followed up the hit While You Were Sleeping (1995) with this fantasy similar to Charly (1968) and a film from the previous year, Powder (1994). John Travolta stars as George Malley, a humble mechanic in a rural California town.

On his 37th birthday, George celebrates at a pub with friends Nate (Forest Whitaker) and Doc (Robert Duvall), the local physician. When he steps outside, George observes a bright light in the sky that knocks him briefly unconscious. When he awakens, George has incredible intellectual powers.

He checks books out of the library in armfuls, becomes an inventor, a psychic, has telekinetic powers, predicts an earthquake, and memorizes Portuguese in minutes. Using his newfound powers, George becomes a hero, but he can't totally win over the spooked townsfolk or the standoffish Lace (Kyra Sedgwick), a single mom burned by love once too often.

As George's kindness breaks down Lace's reserve and a romance begins, his fame spreads, bringing him to the attention of the FBI and curious university scientists. Similarities between George's powers and the alleged benefits of Travolta's religion, Scientology, led to charges that the film was veiled pro-Scientology propaganda.