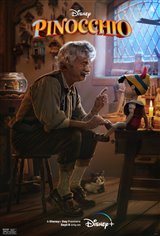 In this live-action computer-animated adaptation of Pinocchio, Geppetto (Tom Hanks) wishes on a star for his newly finished puppet, Pinocchio (Benjamin Evan Ainsworth), to become a real boy. In a burst of light, the Blue Fairy (Cynthia Erivo) grants the wish on the condition that Pinocchio must prove his worth before becoming a real boy.

With Jiminy Cricket (Joseph Gordon-Levitt) as his conscience, naive Pinocchio struggles to navigate his newfound life. Unable to tell a lie without the tip of his nose growing, Pinocchio must prove himself brave, strong, and unselfish while resisting antagonists such as Honest John (Keegan-Michael Key) and the Coachman (Luke Evans).