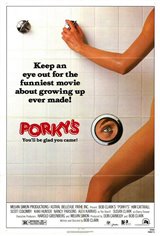 After Porky takes their money and dumps them in the swamp, the guys vow to get revenge. Meanwhile, Pee Wee has to deal with his shrinking penis, someone drills a hole in the wall of the girl's shower, the guys encounter a prostitute named Cherry Forever, and anti-Semitism rears its ugly head.