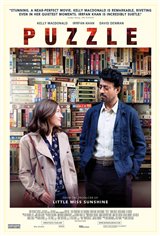 2 votes and 0 Reviews
Passive housewife and mother Agnes (Kelly Macdonald) feels trapped in her daily routine and only seems to find enjoyment in completing complex puzzles. Her controlling husband Louie (David Denman) doesn't approve of her activity and finds it childish. One day, Agnes sees a wanted ad requesting a puzzle partner. She meets Robert (Irrfan Khan), a wealthy recluse who appreciates her talent for puzzles and requests she be his partner at an upcoming puzzle competition. Against Louie’s wishes, she accepts.

As Agnes' marriage begins to weaken, her friendship with Robert grows deeper and she develops a courage she didn't know she had. She finds her voice and stands up for herself, using her daily puzzles to rediscover her own strength and abilities. She starts to reject her imprisoning role as housewife and realizes that if she wants to see a change in her life, she must be the one to make it happen.

Based on the Argentinan film of the same name.