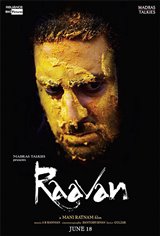 RAAVAN is not a story, it is a world.
Beera Munda – Undisputed, Unlawful, Untamed.
Dev Pratap Sharma – The Punisher, The Law, The Righteous
Ragini – Consience, Beauty, Music

Dev falls in love with Ragini, a spunky dancer who is as unconventional as him. They get married and he takes up his new post in Lal Maati, a small town in northern India. A town where the word of law is not the police but Beera, a tribal who has, over the years, shifted the power equation of the place from the ruling to the have-nots of the area.

Dev knows that the key to bringing order to any place is to vanquish the big fish, in this case – Beera. In one stroke Dev manages to rip open Beera's world, and set in motion a chain of events which will claim lives, change fortunes. Beera, injured but enraged hits back starting a battle that draws Dev, Beera and Ragini into the jungle. The jungle which is dense, confusing and scary. And in this journey they must confront their own truth. A journey which will test their beliefs, convictions and emotions. Emotions which are as scary and confusing as the forest.

The forest becomes the battleground. The battle between good and evil, between Dev and Beera, between Ram and Raavan. But when the lines dividing good and evil are blurring fast whose side will you take. When hate turns to love and good starts looking evil, which side will you battle for? Love is a battle that nobody wins but everyone must fight. Even this Raavan.