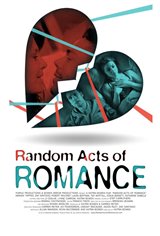 David and Holly are rich newlyweds, but they're not in love. Holly meets Bud, a pot-smoking lesbian who questions the couple’s passion for each other, she realizes that perhaps her marriage isn’t working. She considers leaving David, but one little thing stops her from doing so: an event so out-of-the-blue, it takes Holly to a place she thought she would never go, and leaves David’s life turned upside down.

Meanwhile, Matt and Dianne met in college when Dianne was Matt’s teacher. Seven years later, Matt still hasn’t grown up. His laidback attitude has taken its toll on the fiery and uptight Dianne and she's tired of supporting him. Matt desperately wants to prove to Dianne that he still loves her, but his efforts push Dianne further away