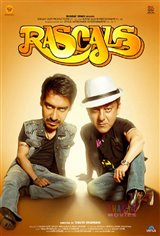 Chetan Chauhan (Sanjay Dutt) and Bhagat Bhosle (Ajay Devgn) are two con artists, who have recently robbed Anthony Gonsalves (Arjun Rampal). The two cons meet each other on a flight to Bangkok. Both rob each other, but only Chetan is successful, as he gets Bhagat's cash and expensive watch, while Bhagat gets Chetan's fake wallet with fake money and fake credit cards. The two become enemies since then. But both meet again when their eyes fall on Khushi (Kangna Ranaut). Chetan lies that he is a donour, who helps the needy, while Bhagat acts to be a blind man, who was once a Navy officer. Both try to scheme out each other by putting the other one in trouble.