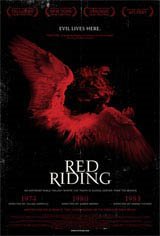 The second entry in an ambitious, dark, and thrilling trilogy of interlinking films set in Yorkshire in the 1970s and 80s.

1980: The "Ripper" has tyrannized Yorkshire for six long years and with the local police failing to make any progress, the Home Office sends in Manchester officer Peter Hunter to review the investigation. Having previously made enemies in the Yorkshire force while investigating a shooting incident in 1974, Hunter finds himself increasingly isolated when his version of events challenges their official line on the "Ripper."