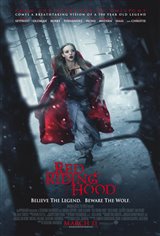 Valerie (Amanda Seyfried) is caught in a love triangle with the man she loves—Peter, and the man who loves her, Henry (Max Irons). Meanwhile, the village is threatened by a werewolf, to whom the villagers offer up an animal sacrifice each month.

When Valerie's sister is killed by the werewolf, the villagers hire a famed werewolf hunter (Gary Oldman) to kill the beast. He informs them that the werewolf is likely one of them—a human who only changes into a werewolf during a full moon. Valerie begins to suspect both Peter and Henry of being the werewolf.