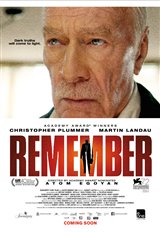 Zev (Christopher Plummer), an Auschwitz survivor, is sent on a mission to avenge a horror from the darkest chapter of modern history after it's discovered that the Nazi guard who murdered his family some 70 years ago is now living in America under an assumed identity.

Canadian Connection: The director and some of the cast members are Canadian. A portion of funding was provided by Telefilm Canada.