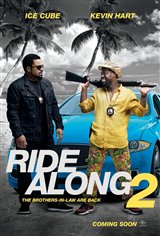 Police academy graduate and newly appointed cop Ben Barber (Kevin Hart) wants to become a full-fledged detective like his future brother-in-law James (Ice Cube), but his eagerness keeps getting in his way.

With time on his hands, he gets into his fiancée Angela's hair, disagreeing on all points with the wedding planner. To get him out of the way during the final preparations for the ceremony, Angela begs James to take Ben along with him on an assignment out of town. James reluctantly agrees and the two of them head to Miami to track down a criminal (Ken Jeong) who can lead them to a powerful drug lord (Benjamin Bratt) just days before Ben's wedding.