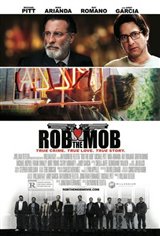 A young couple from Queens (Michael Pitt, Nina Arianda), who plan to get married on Christmas Day, need some cash to solve their debt problems. Deciding that the police won't pay much attention if they steal from the mob, they rob a series of mafia social clubs.

The police, who were staking out the gangsters, can't believe their eyes when they see the couple walking out with the mobsters' cash. They quickly realize the couple can help them take down Big Al and the entire crime family, especially when they find out they robbed one of the mobsters of his wallet, which included a very special list.